Insight: A Brief History of Photo History, and the Drama of 1839

In 1839, tea from India first arrived in the United Kingdom.

That same year, Congress prohibited dueling in the District of Columbia.

Meanwhile, in Paris, the daguerreotype photography process was announced at the French Academy of Science.

Today we look back at the history of photography, briefly, thanks for a video in which Darius Himes, International Head of Photographs at Christie’s auction house, discusses the medium’s progress over the past 180 years or so.

Meanwhile, DP Review recently focused on the creative and scientific drama of 1839, when the daguerreotype was announced — though, notes writer Roger Cicala, the actual techniques used to create the images remained secret, since the French government had not yet officially bought the invention from Daguerre.

“The secrecy led to some suspicion that this was a trick or fake, and just like today, a few people 'proved' it was impossible,” writes Cicala. “Most believed, though. This was an era when revolutionary new technology became available almost every year.”

The video from Himes talks about what he calls “the rich diversity of processes we see throughout the history of the medium.” He provides background on photography’s history and its scientific and artistic underpinnings. And he does it in just over 10 minutes.

Photography, notes Himes, was born “in the matrix of the industrial revolution, out of a marriage between developments in optics and discoveries in chemistry.” The birth came with two “radically different process,” announced almost simultaneously, he notes. In England, a negative-positive process was developed by William Henry Fox Talbot. “In France, Louis Daguerre had labored for years to refine a complete process, which yielded a direct positive on a metal plate without an intermediate negative,” Himes notes.

It was in late January of 1839 when Talbot exhibited his own early photographs at the Royal Institution in the UK.  Just weeks earlier, on January 6, 1839, François Arago, Secretary of the French Academy of Sciences, announced Daguerre’s invention and spoke of his accomplishment publicly, writes Cicala in his look back at photography’s fateful year—part of a series he has produced on photo history. 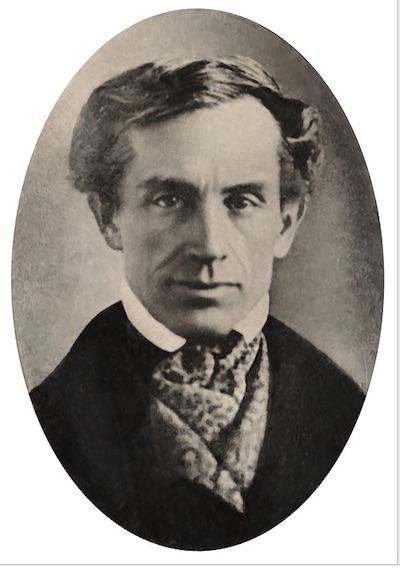 The story that Cicala tells is one of creative chaos stretching not only from Paris to London but also to America, because, as it happened, Samuel Morse had been in France in 1838 trying to sell his telegraph system and was introduced to Daguerre. “Daguerre showed Morse his cameras, Morse demonstrated his telegraph to Daguerre, and they had an inventor-bromance-at-first-sight,” he writes.

Morse hadn’t sold his telegraph yet, so he supported himself by opening the first photography studio in the United States and teaching others photography, Cicala notes. Most of the early American photographers, including Samuel Broadbent, Albert Southworth, Mathew Brady, Albert Sands, and Jerimiah Gurney were taught by Morse.
________________________________________
At top: “The Open Door,” William Henry Fox Talbot, circa 1843.